Before Tanisah Garner’s mother passed in 2018, she would travel by bus from Pleasantville to Newark to babysit Garner’s daughters. Eventually, her mother began opting to stay overnight in Newark because she couldn’t count on NJ Transit buses to be ready to take her back home. “My mother would have a hard time coming back and forth to Pleasantville […]

Before Tanisah Garner’s mother passed in 2018, she would travel by bus from Pleasantville to Newark to babysit Garner’s daughters. Eventually, her mother began opting to stay overnight in Newark because she couldn’t count on NJ Transit buses to be ready to take her back home.

“My mother would have a hard time coming back and forth to Pleasantville … especially at nighttime,” Garner said. “So that’s the reason why she chose to travel less.”

Three years later, public bus reliability has not improved but has been exacerbated by the pandemic. The number of bus drivers and mechanics employed at NJ Transit has decreased, which has led to thousands of canceled bus trips, particularly in southern New Jersey.

Canceling buses has a significant impact on those who depend on them. It could mean being late for work and losing wages. It could increase stress and worry. And it could cause commuters to lose confidence in the transportation system.

From May 1 through June 30 this year, the notices showed a near daily pattern of bus delays and cancellations caused by a lack of drivers and mechanics.

Bus rides vary widely in ridership by region and time. When observing buses, some trips ran empty while others filled up quickly.

Port Authority Bus Terminal:It was once a marvel. Will the next one meet commuters’ needs?

“This is very stressful for our transit-dependent riders because they need to show up to work at a very specific time. They need to be reliable employees,” said Janna Chernetz, deputy director of Tri-State Transportation Campaign, a mass transit advocacy group. “And if the only transportation system they have is NJ Transit, and that is not reliable, that directly effects their ability to retain a job, an income, and that is extremely important.”

NJ Transit defines North and South Jersey lines by their origin and region they serve.

Wright, the NJ Transit spokeswoman, said in an email that “Competition in recruiting for qualified candidates who possess CDL licenses is high nationally due to a spate of CDL openings in the transportation industry as a whole.”

A commercial driver’s license or a CDL is required for anyone who wants to operate a truck or bus.

She wrote that NJ Transit, specifically its bus operations, has seen an increase in retirements and people leaving the job.

Change for riders:NJ Transit moves on from Academy, company accused of $15M in fraud

“In the last three months alone, this need for new bus operators has led to several initiatives including a $6,000 signing bonus, and on-site CDL testing to name a few,” she said. The annual starting salary for bus drivers is $41,800 based on an hourly wage of $21.77.

In addition to drivers, NJ Transit has been looking for mechanics and service workers to maintain its buses.

Of the May through June bus trips that did not run, 45 did not operate because of mechanical or vehicle-related issues, according to analyzed tweets. Twenty-two trips were from North Jersey and 23 trips were from South Jersey.

Wright wrote that while driver availability affects a fraction of the scheduled bus trips across New Jersey, “we take a very strategic approach as it relates to lines and areas occasionally affected by operator availability to minimize the impact on customers so that no one line or specific geographic area is inordinately affected.”

Of the 253 bus lines that web themselves throughout New Jersey and its neighboring states, 23 lines run thorough Monmouth and Ocean counties.

In two months, 22 trips in those two counties were canceled due to lack of drivers and 32 were delayed because of mechanical or vehicle-related issues.

All 22 canceled trips were with buses that had stops in Lakewood. None of the 800 series buses that run along the Shore area in Monmouth County had any delays or cancellations, according to the Press’s review of NJ Transit’s Twitter feed.

Olivia Liu is a reporter covering transportation, Red Bank and western Monmouth County. She can be reached at [email protected]

Even following rise in COVID-19 situations in South Korea, Saipan all set for ‘travel bubble’

Sat Jul 17 , 2021
South Korea has been witnessing a rise in COVID-19 cases. The increasing figures have drawn consideration as to no matter if the govt will put into practice the ‘travel bubble’ signed with Saipan. As per the travel bubble settlement signed in between two countries, people soon after arriving in those countries will not […] 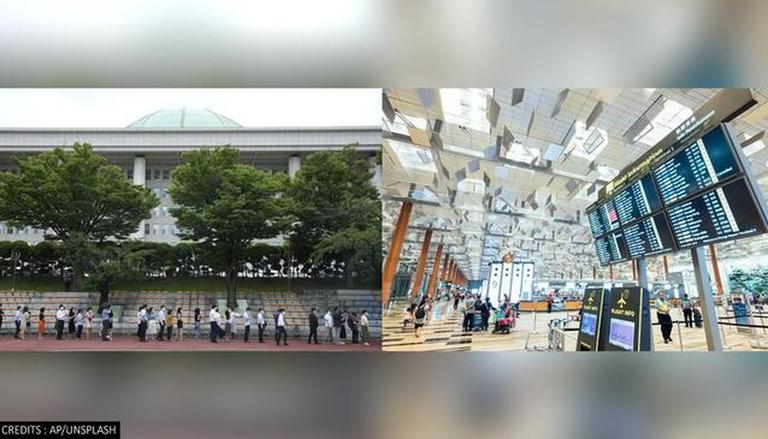