For many, Labor Day weekend signals the end of vacation season. And although COVID-19 has put a damper on major travel, that doesn’t mean families won’t be hitting the roads and taking advantage of nearby travel destinations. That means that highway traffic jams were expected to start Friday evening and end Monday afternoon. And while […]

For many, Labor Day weekend signals the end of vacation season. And although COVID-19 has put a damper on major travel, that doesn’t mean families won’t be hitting the roads and taking advantage of nearby travel destinations.

That means that highway traffic jams were expected to start Friday evening and end Monday afternoon.

And while chances of rain were expected to simmer by the weekend, experts were advising people to be cautious of over-100-degree weather that was expected to hit Arizona.

Check back for the latest road restrictions, travel updates and weather conditions.

Here’s the latest for this three-day weekend:

Follow coverage of the Labor Day weekend in Arizona here.

A lane on state route 87 is blocked for a law enforcement investigation, according to a Twitter update posted by the Arizona Department of Transportation.

The block only applies for the left lane northbound at milepost 244, south of Payson. The area will remain closed until further notice.

Investigations are being conducted by the Department of Public Safety.

6:45 p.m. Saturday: Overnight restrictions on I-17 to be put on hold for the holiday weekend

The Arizona Department of Transportation said there will be no lane restrictions on Interstate 17 between Coldwater Canyon Road and State Route 69 for Labor Day weekend.

Restrictions started on Aug. 29 and usually take place from 6 p.m. to 6 a.m. According to ADOT spokesperson Dough Nintzel, construction work and road closures will resume on Tuesday evening and will take place through Sept. 12.

“We do advise drivers to allow extra travel time, use caution and be prepared for unscheduled closures or restrictions due to crashes, disabled vehicles or other incidents, including possible wildfires,” said Nintzel.

A crash forced the closure of both directions of traffic on State Route 87 in Mesa early Saturday morning, the Arizona Department of Transportation said.

At 5:14 a.m., ADOT sent out a tweet advising drivers that SR 87 near North Stapley Drive was closed in both directions north of the Loop 202 Red Mountain Freeway.

According to ADOT’s incident report, the crash was reported shortly after 12 a.m.

ADOT did not say how long the lanes would be closed.

Dry weather is expected to prevail Saturday through the holiday weekend for most of Arizona, bringing few chances of rainfall and yet staying below excessive heat, according to the National Weather Service in Phoenix.

“The sun’s still gonna get high and temperatures (between) 100 and 105 are still gonna be pretty high,” said Deener. “Do those heat precautions that most of us do on any given summer day.”

He said the weather will stay “a lot quieter” for the holiday as chances for excessive heat or thunderstorms are little to none.

“Enjoy the drier weather, the sunny skies,” he said. “Looks like it’s gonna shape out to be a pretty nice time to be outside and enjoy the fresh air.”

The weather service also said even though temperatures are likely to stay near the average, they could climb slightly higher and advised Arizonans to “keep (their) cool.”

According to Deener, Saturday will bring slight chances of thunderstorms in Gila County, along the Rim and the White Mountains, and south of Tucson.

“But for the most part is gonna be a pretty nice day in terms of thunderstorms,” he said. “For most folks there should be no worries about heavy rains or any kind of flooding concern.”

The Arizona Department of Transportation reported a crash around 8 p.m. on I-17 southbound approaching the Durango Curve in southwest downtown Phoenix.

The two left lanes of the roadway were closed after a vehicle rolled over at milepost 198.

Officials from the Department of Public Safety reported only minor injuries and no one was taken to a hospital.

ADOT did not clarify when the crash was expected to be cleared.

The Arizona Department of Transportation released an emergency alert Friday evening  warning drivers of major delays in the northbound lanes of Interstate 17 caused by holiday traffic and a crash near Sunset Point.

According to the department, the crash at milepost 252 near Sunset Point is blocking the right lane with delays stretching down to milepost 225, south of Anthem.

The lane will remain closed for an unknown amount of time and there is no estimated time for the delays to decrease, said the department.

“Motorists are advised to consider delaying travel until the backup clears,” the department said in the alert.

The Arizona Department of Transportation said drivers should plan for possible delays on State Route 73 north of Whiteriver during Labor Day weekend.

According to the department, construction work for the Post Office Canyon Bridge Rehabilitation project will be on hold during the holiday weekend, but traffic restrictions will remain in place.

Currently, there is only one lane open on State Route 73 with alternating north- and southbound traffic near the Post Office Canyon Bridge, between mileposts 348 and 349.

Other around-the-clock restrictions include a temporary traffic signal, reduced speed limit and 12-foot vehicle width restriction in the area of construction.

“The restrictions are needed so crews can safely remove and replace the existing bridge deck, reconstruct the roadway approach transitions, replace guardrails and other related work”, the department said in a statement.

In order to avoid the weekend traffic, the Arizona Department of Transportation advised drivers to head out early Friday.

According to Doug Nintzel, spokesperson for ADOT, the peak time for road trippers to start leaving Phoenix is late Friday afternoon. By getting an early start on Friday, travelers can avoid the heaviest traffic.

Thousands of drivers will be on highways to the higher elevations such as Flagstaff and Prescott as well as locations in California and Nevada.

“The usual suspects at the top of the list are I-17 north of the Phoenix area, State Route 87 between Fountain Hills and Payson,” Nintzel said.

Nintzel said construction roadwork was not scheduled for the holiday weekend, stopping at around noon Friday.

Friday afternoon will bring calm winds and a high of about 101 degrees, according to the National Weather Service in Phoenix.

The Valley can expect to start “drying out” over the weekend after this week’s series of showers, according to meteorologist Matthew Hirsch with National Weather Service in Phoenix.

With rain chances staying below 10% each day, the odds of rain putting a damper on the festivities are looking slim.

By noon, Phoenix will hit 95 degrees and cool down to about 90 degrees by 10 p.m. Friday night will have partly cloudy skies with a low around 81 degrees.

The Mesa area will be sunny during the day with a high of 99 degrees and a low of about 77 degrees Friday night.

Scottsdale will be at about 93 degrees by noon and is expected to hit 90 degrees around 8 p.m. Friday.

The Tempe area will also be sunny with a high around 101 degrees on Friday. Temperatures are expected to be in the low 90s to upper 80s in Tempe Friday night.

Sun Sep 5 , 2021
Folks group the beach in Huntington Seashore, Calif., above the lengthy Labor Working day weekend previous 12 months, months just before COVID-19 vaccines had been readily available. This year, the CDC is recommending that people who are not thoroughly vaccinated continue to be house. Jae C. Hong/AP cover caption toggle […] 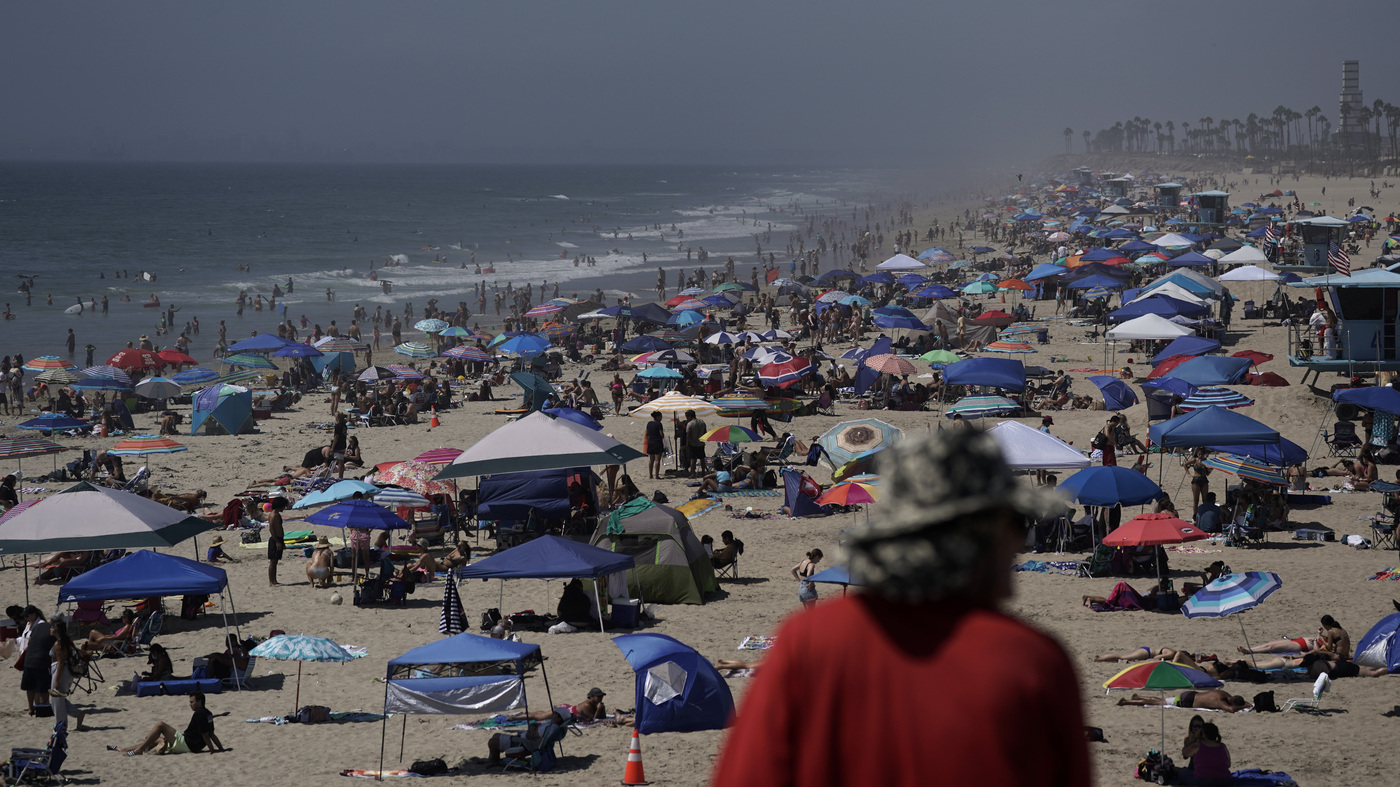